Is it absolutely beautiful where you are this morning?!  Holy cow, if not you should high-tail it to southeast Missouri, ‘cause it is GORGEOUS.  Sunshine and cool morning temps…ahhhh folks, this is the stuff that FALL is made of.  Is it finally here to stay??  I HOPE SO! 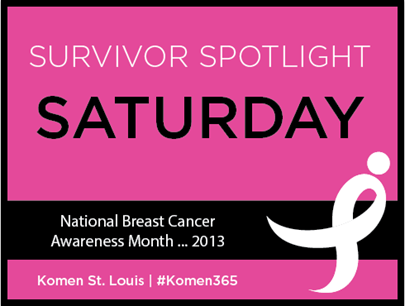 But the reason I’m here is not to gab about the weather-I want to share something with you!  I am honored to be in Komen St. Louis’ Saturday SURVIVOR SPOTLIGHT!  Look! 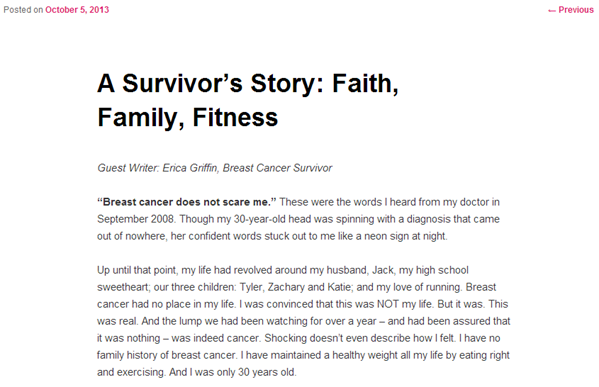 Cool right?!  You’ll have to click on over to read my story, although if you’ve been reading this blog for any length of time, you probably already know it.  I actually had this article written for awhile, and apparently I didn’t go over it as closely as I should have, because I forgot to add in the part about my bilateral mastectomy and reconstruction.  Oops.  Small detail <<<not>>>.  But I count it a privilege to be able to share my story with others through Komen…silicone or not.

Breast cancer knows know boundaries, y’all.  You can’t be too young, too healthy, too-anything, to be immune.  You have to be vigilant in knowing your body and doing self-breast exams, getting your mammograms and visiting your doctor.  And for goodness sake-letting them know if something isn’t quite right.  Just do it.  Please.

Here I am again…supremely late for an important post.  On the Monday the 16th of September marked five years since being diagnosed with breast cancer.  Five years.

I am so thankful to have this list, to have made it this far.  I hope my list of “Year” posts becomes pages and pages long someday.

I am trying to think of what to say about this day that hasn’t already been said before.  I’ve recounted my memories of “that day” several times, and honestly it still makes me sick to my stomach to think about the morning of September 16, 2008…to think about where my head was, my heart aching, the confusion and traumatic mess of it all.

Five years later I hate to say, but I still think about cancer, A LOT.  Not as much as before, but still.  It’s a tough thing to get past.  And I think that when I was first diagnosed, I put on the brave face and smile and was so concerned with being strong for everyone else, that I didn’t really ever check in with myself.  How was I feeling?  What was my thought process??  How am I dealing?

I am certain that I (along with many other survivors) have a form of post traumatic stress disorder, and a huge case of survivor’s guilt.

First things first, the PTSD.  Being diagnosed with breast cancer was over-the-top traumatic for me, as I’m sure it is for many women.  But I seriously had been reassured by several different doctors that my lump was indeed NOT cancer, that I did not even consider it.  The thought of them sending off my lump to pathology and then the nurse calling me with “bad news” the next week never even crossed my mind.  But when that call did come, I went into sort of a survival mode.  Emotions shut down, close off all the sad and scary things, and spend my time reassuring everybody that I AM FINE. <---Which I said so many times that I even contemplated getting it put on a t-shirt.  I did not want people to worry about me.  I just had to get through it.

Slowly but surely over the past few years, I have woken-up a little about it.  I have really had to look point-blank at my mortality, and the seriousness of my diagnosis.  I mean, I always knew it was serious, but not to the extent I do now.  I’m certain that was a God thing.  Do you remember when I said that I “buried my head in His robe until the storms had passed”?  Yep.  And little by little He is working on me, and continues to help me get through this “storm.”  Unfortunately, life is full of them.  But our God is faithful.  And I am so thankful.

NOW- for the survivor’s guilt.  Oy, do I have a load of it.  I first experienced it when I was still in treatment and my best friend’s brother-in-law lost his very fast battle with sarcoma.  I remember crying to my mom over the phone and telling her that I felt so bad, that I was doing so well and here this loving family had just lost a young, great man.  The guilt has come back at different times over the years, when someone I know loses a battle with cancer, but it has been especially powerful in the past few months.  Through the magic of social media, I have become friends with the some of the best “breast” friends ever.  The bond we have is so special.  I can’t explain how comforting it is to know other women like you who have battled the same way you have, who have been through the treatments, who have rocked the bald head, who have gotten some of the same pitying looks you have, and who just get it.  And many of my friends have young kids, and that is another realm all in itself.  Moms with cancer.  That’s just not right.

In my perfect world, all of my breast friends would be doing [physically] as well as I am.  We would all be trying to transition into our new normal and celebrate being survivors.  Life would be one big pink party.  But as it goes with cancer, that’s not always the case.  I have lost friends.  Several, actually.  I have quite a few that have recurred and now fight every day.  For a while it seemed like everyone around me was having a recurrence.  It is fear-producing and anxiety-provoking at it’s worst.  Because if you ask a cancer survivor what they worry about the most-chances are, it is the fear of the cancer coming back.  And as a survivor who stands here in remission, I feel bad.  Well, not bad like I wish MY cancer was back, too; but bad, like “Why them?  Why not me?  Why am I doing so well??”  It is gut-wrenching.  And this is not to say that it is ANYTHING compared to what my stage IV girls are going through, it’s certainly not.  And that makes me feel bad too!  How can I sit here and complain about survivor’s guilt when others have SO MUCH more to complain about!?  Feeling bad for feeling bad…  I’m tellin’ ya…it’s a trip.  Cancer is so much more than a physical battle, it’s emotional, mental, all encompassing.  And even at the five year mark, I’m still dealing with it all.

So here I sit, five years and fifteen days into this journey.  I’m still learning, still growing, still figuring out my new “normal,” and I still trust in my faith in God to carry me every day.  Every is not a “bad day” and it’s not like I am not out living and enjoying my life-because it’s pretty darn good.

My family is awesome and my kids are growing up so fast I can hardly stand it!  I enjoy every second I have with them…even when they’re fighting or picking at each other.  But this “survivor experience” is just something that everyone handles differently…this is just my way, I suppose.  But I find bits of peace in things like my little reminder like the verse taped to my bathroom mirror that has been there for probably 3-4 years now- 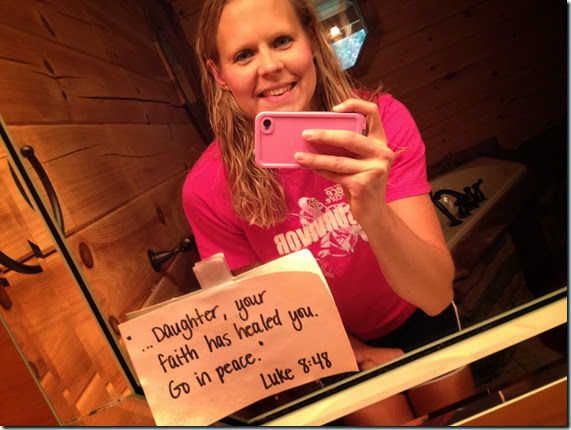 And it’s written on a notecard from Vacation Bible School this summer where I had each of my kiddos in my class write part of our memory verse, 2 Timothy 1:7, with their own name inserted (taped to my wig box, ironically)- 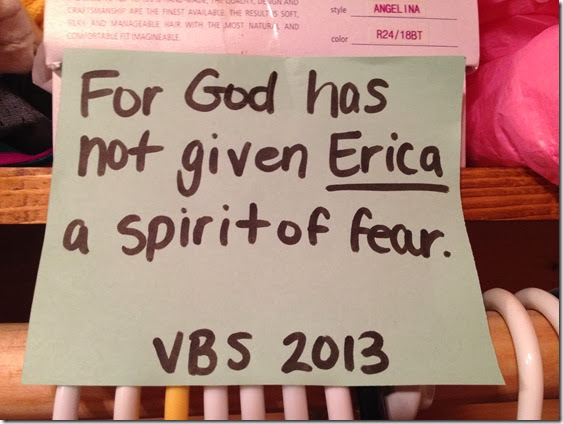 Little reminders to continue to TRUST HIM, even when I’m not sure which end is up.  I know HE DOES.  And that in itself brings me the most comfort.  I don’t have to have all this together-HE’S GOT THIS.

One last thing-now that I’m so stinking late in getting this anniversary posted, it’s now OCTOBER, Breast Cancer Awareness Month!  I’ll just share with you what I put on my Facebook this morning- 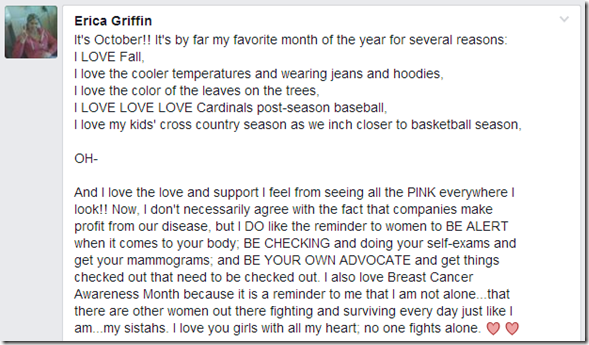 That pretty much sums it up. Love you guys.

Hello!! Is it absolutely beautiful where you are this morning?!  Holy cow, if not you should high-tail it to southeast Missouri, ‘cause it...

*Erica*
Hey! I'm Erica, a 31-year-young stay-at-home mom of 3 wonderful, active children. My husband, Jack, and I have been married for 14 years. I am also proud to say that I am a breast cancer survivor! I live in a sub-small town in the Midwest, taking care of my family and loving it! I never had imagined that my life as a "domestic goddess" would be very fulfilling, and I am surprised on a daily basis at just how fulfilling it is! As you can probably imagine, there is not much time left for good-ol' mom, so this blog is part of where I am making time. Well that and in my running shoes. So on my blog, you will be seeing my workouts, occasional recipes, and my 3 favorite little people (and my favorite big-guy!). Sometimes it gets a little crazy around here, but if you are up for keeping up with a busy mom, let's go!

Hey! I'm Erica, a 34-year-young stay-at-home mom of 3 wonderful, active children and a breast cancer SURVIVOR. My husband, Jack, is still my high school sweetheart and we have been married for 17 years. I live in a tiny town in Missouri, taking care of my family and soaking up every minute in every day. I am a lover of Jesus, running, coffee, girl-time, positivity, dancing, fruits & vegetables, shopping trips, and sports. I begin each day with the intention on pleasing the Lord and because of His amazing grace, at the end of the day, He loves me anyway. So on my blog you will be seeing my 3 favorite little people (and my favorite big-guy!), my hopes, my dreams, and my prayers. Sometimes it gets a little crazy around here, but if you are up for keeping up with a busy mom, let's go!

You can contact me by email at: jegriffin @ centurytel . net

Ah, Sovereign LORD,
You are my hope, the Lord of my life. I wait on you and move cautiously in my decisions. I'm not ashamed to trust in Your guidance, Lord. Instead, I feel thankful for the encouragement and surety You give me. As I trust in You, I'm filled with peace. Throughout the day, my thoughts often turn to You for direction and strength. In quiet confidence I find strength only You can give. You, dear Father, are my Rock and my Defender; I shall not fear. I know in whom I believe and I'm persuaded You keep me close to You day by day. I look to You, I doubt not in Your unfailing love for me. Thank You. In Jesus' name, Amen.
-Anita Corrine Donihue 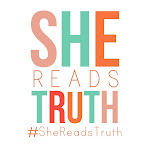 "...And let us run with perseverance the race marked out for us," Hebrews 12:1